Congratulating and Condoling the Islamic Ummah on the Martyrdom of,
Shaykh Ali Abu Muhammed al-Dagestani, May Allah have Mercy on Him,
Amir of the Islamic Emirate of the Caucasus.

All praise is due to Allah, the Lord of the Worlds. Peace and blessings be upon the best of creation, the master of the messengers, Muhammad ibn Abdullah, and upon his family and his companions, all of them.

Allah the Exalted said: Among the Believers are men who have been true to their covenant with Allah: of them some have completed their vow (to the extreme), and some (still) wait: but they have never changed (their determination) in the least. [Al-Ahzab, 23]

We congratulate the Ummah of Islam and condole it on the dismounting of one of the flags of jihad and martyrdom, a master among masters, the mujahid, the knowledgeable, the Shaykh, Ali Abu Mohammed Al-Dagestani, the Amir of the Islamic Emirate of the Caucasus, after the deceitful Russians attacked the base in which he was stationed. So he affirmed the bravery of lions and fought them as heroes fight. He thus favored the hereafter over the world, to prove with his martyr’s blood the truthfulness of holding to ideals that he believed in and called people to – we hold him so and we do not exalt anyone over Allah.

The news of the death of Shaykh Abu Mohammed came at a time when his Mujahideen brothers are changing the course of history, and are framing with their blood the greatest of examples in heroism and sacrifice in their war against the global Kufr system and its apostate agents all over earth.

The martyrdom of Shaykh Abu Mohammed Al-Dagestani and others from our leaders and Mujahedeen scholars, is nothing but another flame added to the fire of jihad that moves the Ummah of Islam and increases its ferocity, for their blood is a light that will brighten the way for the Muslims after them. We are an Ummah as the Prophet, peace and blessings of Allah be upon him, said: ‘Like the rain, it is unknown which is better it’s first or last’. No sooner do we lose a hero than Allah replaces him with another. The wombs that gave birth to Khalid are still giving birth to his likes, so it is impossible that Jihad be affected by the death of an amir or the loss of a loved one.

Our message to the brave ones and the defiant knights, the lions of Jihad and Tawheed in the land of the Caucasus, the northern fort of Islam, we tell them: We are from Allah and to Him we return, and what Allah has taken is His, and what He has given be patient with, hoping for His reward. Be steadfast on the road taken by your leaders and be the best successors to the best predecessors. Know that you are on one of the greatest fronts of Islam, and that you are the hope of the Ummah to conquer the land of the Romans, and destroy the deceitful Russians. So let not loss come to Islam from your side, and do not be humiliated and do not be saddened. You are the highest if you are Muslims.

We ask Allah to bless your jihad and efforts, and to make you steadfast and grant you victory over your enemy, for He is the best Caretaker and the best Giver of victory.

Our last supplication is that all praise be to Allah, the Lord of the Worlds.
May Allah bless him and give him peace, and may He bless our Prophet Muhammad and his family and his companions, all of them. 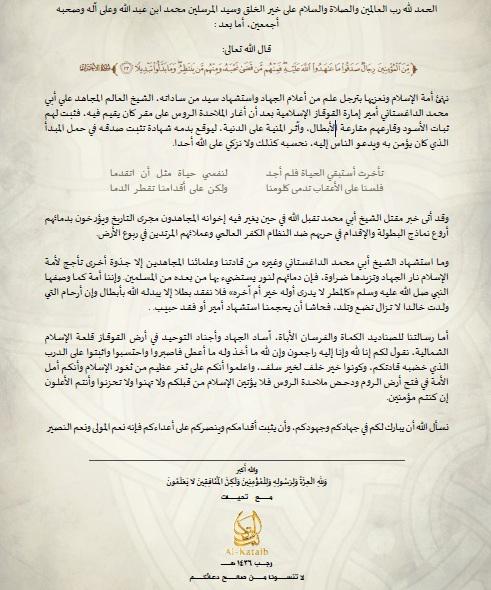 We are sorry to say most of our videos on the site are removed because our linked Dailymotion account is suspended. We will try to fix the links and upload the video's again. Our apologies. Don't forget us in your Dua.